You are here: Home / Genealogy / The Revolutionary War and Germanna 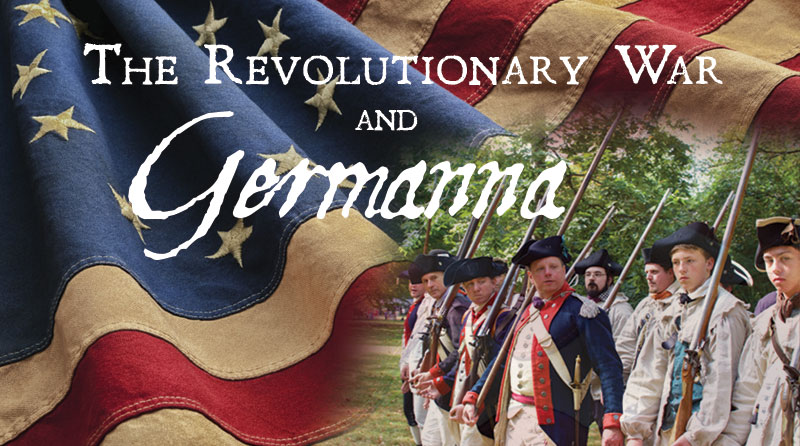 Many Germanna-related individuals served in some capacity as patriots during the Revolutionary War.

NEW: Download this detailed sheet of data pulled from the Daughters of the American Revolution database. A huge thanks to Germanna descendant and Explorers Project volunteer Cookie Gover for researching this. She has matched 262 Germanna patriots to DAR accepted proofs, and another 249 patriots that may prove to Germanna patriots.

An important unit to the story of Germanna is the Culpeper Minute Men, organized by recruits from modern-day Culpeper, Fauquier, Madison, and Orange counties. The Culpeper Minute Men Chapter, Sons of the American Revolution, has compiled a list of the men who served in this unit and is posting the results of their latest research on their website and blog.

From Wikipedia: The Culpeper Minutemen were organized on July 17, 1775 in the district created by the Third Virginia Convention consisting of the counties of Orange, Fauquier and Culpeper. The Culpeper minutemen fought for the patriot side in the first year of the American Revolution, and are remembered for their company flag: a white banner depicting a rattlesnake, featuring the phrases “Liberty or Death” and “Don’t Tread on Me“. The Culpeper militia next participated in the Battle of Great Bridge in December 1775. The battle was a complete American victory. There were accounts of the battle that suggested the British were unnerved by the reputation of the frontiersmen.

Read article about George Slaughter, a captain of the regiment’s Culpeper County company and one of the founders of Louisville, Ky. Born in Culpeper in 1739, Slaughter was a descendant of the Germanna Colony’s settlers. He recruited one of the first companies for the famous Culpeper Minutemen. . .  Read More

Below is a muster roll for the month of May 1778 of the company formerly commanded by Capt. George Slaughter in the 8th Virginia Regiment of Foot. Note the Germanna names of Philip Huffman, Christopher Moyer and Capt. Slaughter. Click on below image to enlarge it.

Watch presentation about The German Regiment–Germanna and the 8th Virginia in the Revolutionary War:

Important information can be extracted from Revolutionary War pension records. Transcriptions of many pension applications of Germanna descendants may be found here. To assist in understanding the source records, refer to the following explanations:

To get more out of such records, refer to the helpful timeline below.

Timeline and Brief Explanation of Pension Legislation By Continental Congress and the United States:

26 August 1776 – The first pension legislation for the American colonies acting as a group was enacted and provided half pay for officers and enlisted men who were disabled in the service of the United States and who were incapable of earning a living.

15 May 1778 – A resolution provided half pay for 7 years after the conclusion of the war to all military officers who remained in the Continental service through the end of the war. Enlisted men were to receive an $80 gratuity after the war.

24 August 1780 – A Continental Congress resolution offered half pay for 7 years to widows and orphans of officers who met the requirements of 15 May 1778. Note: Widows and orphans had until 1794 to file for a pension under the resolution of 24 August 1780. After that date, a widow would need a private act of Congress introduced on her behalf to receive a pension. See the Act of 4 July 1836 for further information.

29 September 1789 – The First Congress of the United States passed an act that provided for the invalid pensions, previously paid by the individual states, should be continued and paid by the Federal Government for 1 year. In subsequent years, legislation extended the time limit.

23 March 1792 – This act permitted veterans who were not already receiving invalid pensions to apply to the Federal Government directly.

10 April 1806 – The invalid pension laws were extended to include veterans of State troops and militia service eligible for Federal pensions. This act superseded all previous Revolutionary War invalid pension legislation. Note: Prior to 1818 national pension laws concerning veterans of the Revolutionary War (exception 15 May 1778 resolution) specified disability or death of the soldier or sailor as the basis for a pension.

18 March 1818 – The U. S. Congress granted pensions to Revolutionary War veterans for service rendered without injury. The officers and enlisted men were eligible under this Act if they had served in a Continental unit or in the U. S. naval service for 9 months or until the end of the war. These pensions were granted for life. Note: The above pension act resulted in huge numbers of applications being filed and approved with the resulting financial strain on the U. S. government.

1 May 1820 – A new law required everyone receiving a pension under the 1818 Act, as well as new applicants, to submit a certified schedule of his estate and income to the Secretary of War. The Secretary of War had the authority to remove anyone from the pension list who, in his opinion, was not in need of assistance.

1 May 1823 – An act was passed to restore the pensions to many of those whose names had been removed as a result of the 1 May 1820 legislation.

15 May 1828 – The act passed granted full pay for life to surviving officers and enlisted men of the Revolutionary War who were eligible for benefits under the 15 May 1778 resolution, as amended. Applicants did not have to demonstrate need.

7 June 1832 – This act extended the 15 May 1828 provisions to more people. Every officer or enlisted man, including those who served in the naval service and the marines, who had served at least 2 years in the Continental Line or States troops, volunteer or militia, was eligible for a pension at full pay for life. For those who had served less than 2 years but at least 6 months were eligible for pensions at less than full pay. Money due the pensioner from last payment until the date of his death could be collected by the widow or children. Applicants did not have to prove need.

4 July 1836 – Some widows of Revolutionary War veterans were again permitted, as a class under public law, to apply for pensions. This act provided that the widow of any veteran who had performed service as specified in the 7 June 1832 Act was eligible to receive the pension that might have been allowed to the veteran under the terms of that act, if the widow had married the veteran before the expiration of his last term of service.

7 July 1838 – This act granted 5-year pensions to widows whose marriages had taken place before 1 January 1794.

29 July 1848 – Congress provided life pensions for widows of veterans who married before 2 January 1800.

3 February 1853 and 28 February 1855 – All restrictions pertaining to marriage were removed.

9 March 1878 – Widows of Revolutionary War soldiers who served as few as 14 days, or served in any engagement, were declared eligible for life pensions.

NEW: Download this detailed sheet of data pulled from the Daughters of the American Revolution database. A huge thanks to Cookie Gover for researching this!

This sheet updates the below previous list and offers far more details.

Listed below are additional men believed to be Germanna descendants who served the patriots’ cause in the American Revolution. If you have proof of their service, please provide a copy to the Germanna Foundation. Digital copies are welcome at foundation@germanna.org.

Samples of documentation of Revolutionary War service and other instructive images and stories:

Below are two images from a map which represents an area with a very interesting Germanna story.

John Back, a Germanna descendant, the grandson of Harman Back who arrived in 1738 and settled in the Little Fork and purchased 100 acres from Jacob Holtzclaw, boasts a most fascinating Revolutionary War experience. John Back was born in Culpeper County, Virginia in 1760 and enlisted in the Army of the United States for twelve months in March 1778 as a private. John Back traveled with George Rogers Clark as part of the group of soldiers sent by Virginia governor Patrick Henry to attack the British at what is now Kaskaskia, Illinois. In July 1778, Clark and his men captured Kaskaskia and later marched back to Virginia in 1779 where they delivered their captives to then governor Thomas Jefferson.

John Back’s experiences with George Rogers Clark, in what was deemed a great victory for Virginia and the patriot cause, is just one example of a Germanna descendant actively participating in the Revolutionary War. In his pension application affidavit Back describes the end of his Kaskaskia experience thus: “I was now very unwell & almost naked and resolved to come home as soon as I was able.” He stated he was gone altogether 2 years and 3 months.