You are here: Home / Announcements / Remembering Pearl Harbor and Germanna’s Own 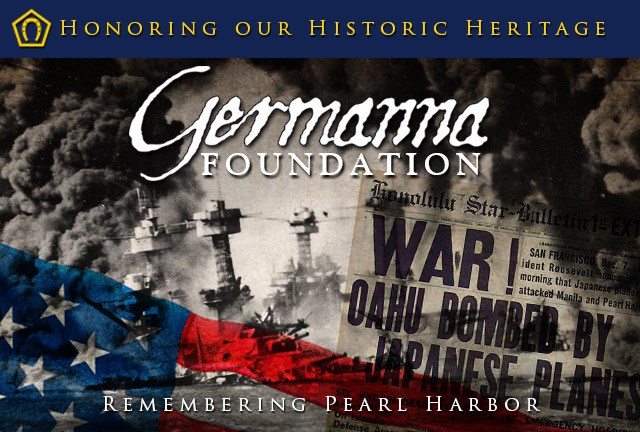 Pearl Harbor Day is a time of remembrance for Americans.  At 7:55 and 42 seconds, on the morning of December 7th, 1941, thousands of unsuspecting Americans were killed in a surprise attack by the Japanese on Pearl Harbor in Hawaii.  It was the bloodiest foreign attack on U.S. soil in the modern war era, until the September 11th attacks in 2001.  Perhaps you have made a pilgrimage to Pearl Harbor to pay your respects at the USS Arizona Memorial, to the many men who died that day.
For Germanna people, on Pearl Harbor Day, we remember two of our own.  As war clouds gathered over America in early 1941, Richard Walter Weaver was a 17-year-old Nevada boy and the sixth great-grandson of the 1717 Germanna colonists Phillip Joseph Weaver and his wife Susanna Klaar (the sister of colonist Hans Michael Klaar, ancestor of the Clores in America).   Congress had just enacted a law allowing Americans as young as Richard to enlist in the armed forces.
His parents, Ray and Marguerite McCuiston Weaver, said they would sign for him if that is what he wanted.  On February 20, 1941, his parents drove him to Reno where he boarded the train for San Francisco. The next day, he was assigned to his permanent ship: the USS Arizona.
Also serving on the USS Arizona was another young man, a Kentuckian named Clay Cooper Rector, the son of Wendell Wesley and Lela Florence Cooper Rector.
We don’t know for certain if they knew each other, but Richard and Clay were Germanna cousins.
Their families were related through the Germanna Broyles, Majer and Volck families. Richard also was a member of the Broyles, Finks, Fleischmann, Schön, Wayland families, while his cousin Clay also descended from the Germanna Bach, Fishback, Heimbach, Hitt, Hofmann, Otterbach, Rector, Rouse, and Ruop families.
Clay Cooper Rector was in charge of the storeroom on the USS Arizona, and the last family member to see him may have been his cousin Harrison Clay Rector, who left Pearl Harbor on the USS Anderson just two days before the attack.
Richard Walter Weaver had duty that fateful morning of December 7, 1941.
He was seen sprinting to his station Number 6 on topside when the alarm sounded summoning all men to battle stations. It was there that the first and most lethal enemy projectile struck.
The USS Arizona sank within nine minutes.
It is for men like these that the Germanna Foundation exists, that we remind each other in gratitude of the shared sacrifice of our ancestors and kinsmen who built America.
Today, their sacrifice is remembered in the Germanna Foundation Memorial Garden, where their memorial stones rest next to each other as a testament to the rising generation.

Our Memorial Garden is a fitting tribute to those Germanna descendants who have gone on before us, whether in war or in peace.  You may want to honor or remember a loved one in our Memorial Garden with an engraved paver stone.  For each paver, the Germanna Foundation will arrange for stone writer Bob Clore to engrave three lines of text (25 characters per line, including spaces) for $150, four lines for $200.
Years ago, I engraved the names of my relatives on the Germanna pavers as a Christmas gift. Today, my children always look for their stones, and then hop from generation to generation back to Germany!
If you would like to honor and remember one of your loved ones while supporting the Foundation in this way, please call Barbara Bounds or John Howard at the Germanna Visitor Center at 540-423-1700 or use our online order form.
I wish you all the best in this Advent season,
J. Marc Wheat
President