You are here: Home / Fort Germanna / Digging into the past at Germanna 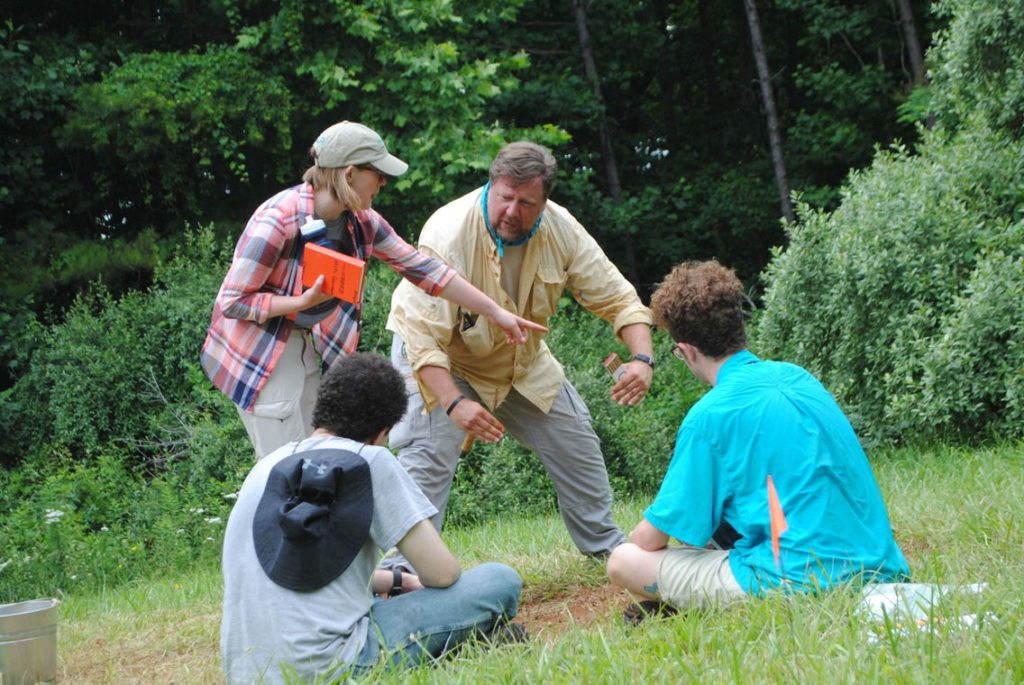 By Amber Galaviz, published in the July 14, 2016 edition of the Orange County Review.

For the first time in 20 years, excavation work is being done at the Fort Germanna/Enchanted Castle archaeology site on the eastern end of Orange County. The Germanna Foundation hopes to discover the boundaries of Fort Germanna during the field season.

The Germanna Foundation operates a visitor center at its property at 2062 Germanna Highway, which encompasses 179 acres of the original land settled by German families between 1714 and 1717. Fort Germanna, built in 1714, was settled by the immigrants brought to the site by colonial Lt. Gov. Alexander Spotswood, who commissioned them as rangers and hoped to use their labor to mine for silver and iron.

The foundation was established in 1956 to preserve the land and heritage of the earliest German settlements of colonial Virginia.

This summer, The Germanna Foundation has welcomed five seasonal archaeology staff members—an assistant field director and four interns—to its team as it searches for clues on where the fort boundaries were. The archaeology team will also be joined by nine students from Virginia Commonwealth University (VCU) who are conducting a field school. While learning excavation techniques and other important archaeological lessons, the students will aid in the search of Fort Germanna’s boundaries. VCU students had their first day at the site June 27 and will be working there until July 28. The team is being led by the Germanna Foundation’s archaeologist Dr. Eric Larsen.

“Field school is kind of the apprenticeship for learning how to dig and do archaeological excavation,” Larsen said. “So they’re learning all types of skills from actually using the trowels and the shovels, to recovering artifacts from the soil levels they identify.”

The field season consists of nine to 10 weeks, explained Larsen, and this is his first real look below the surface. While he’ll only have the additional help for a portion of the summer, he said any work that’s not finished will be left up to him and any volunteers he enlists.

While the goal of the excavations at the site is to discover Fort Germanna, the foundation will be learning about the rest of the site’s history as well, including Gov. Spotswood’s Enchanted Castle that was there from about 1720-1750, the Gordon Farm dating back to 1790 and the Civil War, explained Larsen.

Previous excavations conducted by University of Mary Washington archaeology students, uncovered a 10-12 foot long trench with soil markings indicating the fort’s wooden, palisaded wall, as well as the remains of Spotswood’s Enchanted Castle, built in the 1720s shortly after demolishing the fort.

Since acquiring the property through a land transfer in 2013, the Germanna Foundation has not only hired a staff archaeologist, but has stabilized the Enchanted Castle remains, conducted new topographic survey and mapping work and collected data using ground penetrating radar over the 1.1-acre portion of the site most likely to have been the site of the fort. The 62 acres of transferred land has a historic preservation easement covering it and includes the Enchanted Castle and original Fort Germanna and is on property on State Route 3 across from The Germanna Foundation’s visitor center.

Currently, the team is working on opening units, 5 foot square sections examined by screening soil layer by layer, which Larsen said he hopes will reveal more of the trench previously discovered.

On the south side of the site, Larsen said they believe they’re seeing plow scars from the farm’s fields.

“We’re not seeing very much 20th century [items], which means this area was seeing very heavy use during the 20th century,” he said. “We’re seeing mostly 19th century or earlier, which is good. We have not yet found more of the fort—we want to.”

The Germanna Foundation expects to spend $65,000 for this summer’s archaeology field work alone. Germanna’s archaeological research program is an independent nonprofit effort, with no budget support from state or federal tax dollars. In an effort to fund its current and future field work, the foundation is seeking donations in multiple levels: $65,000 sponsors an entire field season, $5,000 underwrites the costs of a seasonal excavation intern and a 25×25 foot explorer grid costs $800.

For more information about the foundation or to donate, call (540) 423-1700 or visitwww.germanna.org.