You are here: Home / Families Committee 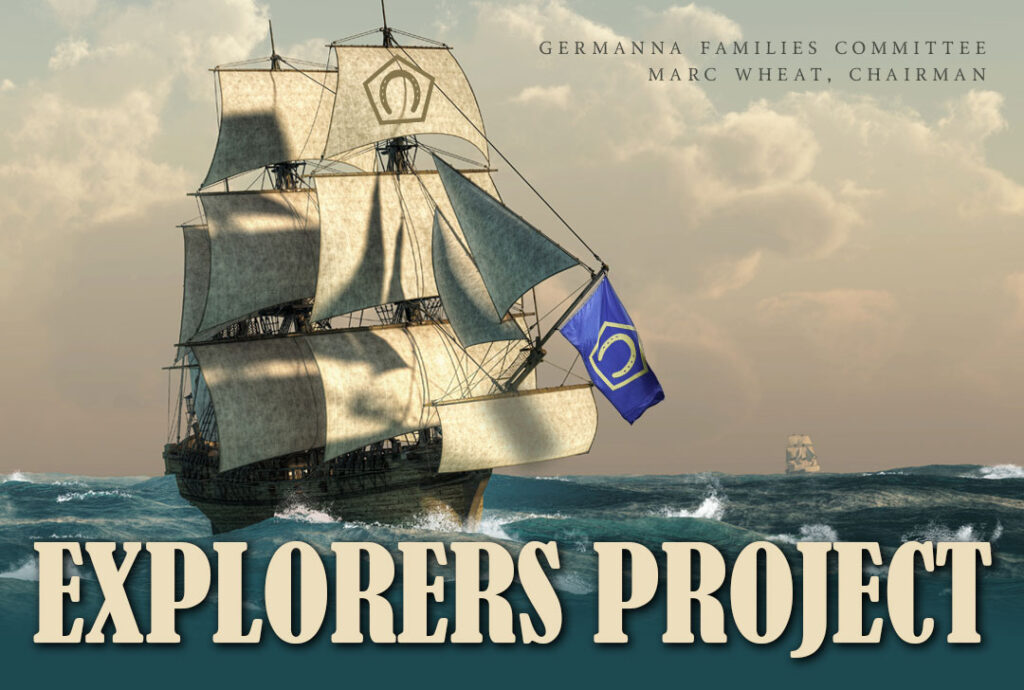 ***Past meetings can be watched on Vimeo with the same password:  familyisagift

There are over 200 people on our list expressing interest in the Germanna Explorers Project. If you want to be a part too, expand your friendships and learn new skills, fill out this form to join the list and be notified of our next Zoom meeting:

NOTE: If you are already a member of the Families Committee, you’re already on our list and will get the Zoom links for each meeting; no need to sign up again.

Germanna Families Committee report to the Germanna Foundation Board of Trustees meeting, July 15, 2021

The primary goal of the Families Committee is to identify and communicate with as many of the families whose ancestors or cousins settled among the Germanna community and turn them into members who are regular donors and volunteers. The secondary goal is to turn that diaspora network into a force for good to promote good relationships between the American people and people overseas.

Finding living descendants is a blend of actively looking for them through research, and the other is to leave a digital trail across the internet for descendants to find Germanna. Through emailing our present members about the four Family Committee meetings (as well as communicating through Facebook, Geni, Ancestry, and other networks) we have developed a core group of over 200 volunteers organized by “Clan Chiefs,” the heads of genealogical families representing thirty-three of the main branches of Germanna colonists.  We have Germanna-connected people who have agreed to volunteer across the US, Germany, UK, New Zealand, Netherlands, Switzerland, and just added this week a US Army contractor living in Kazakhstan.

We launched a new member nomination page – www.germanna.org/Explorers.  We wanted to have a self-explanatory page where prospective members could be nominated. You can enter in data of any prospect (of known descent or not) with the typical contact information plus links to where they may appear in LinkedIn, Facebook, Ancestry, Geni, newspapers, Germanna family names if any.  An added feature is that the person nominating will add his or her name and email at the bottom – so if there is a need to follow up on a person, we know where the nomination came from and can also track who is making the most nominations between now and Founder’s Day, March 14, 2022.

Glen Cress (formerly of Mission Control during the Apollo program) runs our Germanna DNA project focusing on X and Y (matrileneal and patrilineal) DNA, while another volunteer with a strong technical background (and former elected school-board member), Steven Sluder, established a group on Facebook called “Genetic Genealogy for Germanna Descendants using Autosomal DNA” – it has 228 members, including Mark Chaplin of England who has discovered he descends from an American soldier with a Germanna background.  This group is an adjunct to the FTDNA Germanna DNA Project. It’s focus is on Autosomal DNA testing and how it can be used in genealogical research. Those who have taken a DNA test through Ancestry, MyHeritage, 23andMe, FTDNA, Living DNA or any other autosomal DNA testing service are invited to join this group to learn how to get the most out of Germanna DNA test results.

Cathi Clore Frost volunteered to lead an effort to host a mini-Germanna conference and reunion in October, and presented her ideas at the fourth meeting.

Steven Sluder has put us in contact with one the top authorities on German genealogy at the LDS FamilySearch. It is now being discussed with higher level people at FamilySearch to partner in some way with Germanna. We told them that our volunteers have helped establish Germanna entry points for members of the public who may not know they are Germanna descendants on Famous Kin (https://famouskin.com/category.php?cat=30+germanna), Geni (https://www.geni.com/projects/Virginia-Germanna-Colonies/15479), Relative Finder (https://www.relativefinder.org/#/groups/190945).  We will soon be establishing projects through the Guild of One-Name Studies, and a webpage to index the many Germanna trees on Ancestry and other sites. We also have active DNA projects focused on X&Y DNA (https://germanna.org/resources/genealogy/dna-project/) and Steve Sluder has launched a wonderful project for Genetic Genealogy for Germanna Descendants using Autosomal DNA (https://www.facebook.com/groups/141907514612161)

This is the biggest genealogy company in the world, and we have had little traction with them in the past. Steven Sluder has excellent contacts there, but advises that we get movement with FamilySearch first, with whom Ancestry closely works.  Among the 200 volunteers, we will identify key trees that are strong a particular family to post on a dedicated page on the Foundation website.  These will not be as high quality as the Germanna Foundation Descendant Database that Cathi Clore Frost curates, but it will help her generate sources of quality data to be imported into the database.

I have established Facebook groups for the major Germanna surnames based on B.C. Holtzclaw’s Germanna Record on the 1714 colonists and Little Fork settlers as well as John Blankenbaker’s Germanna Record on the 1717 colonists and those who settled into the Hebron Lutheran Church community.  There is a considerable amount of traffic on each one of groups, and each one was seeded initially with information on with links to purchase appropriate Germanna Records, discussions of relevant villages visited on the annual Germanna trip, as well as key documents that they can download and analyze at home.

Facebook’s “Descendants of the Germanna Settlers of Virginia” – 2,267 Members.

This group has continued to grow with a lot of interaction, new discoveries, and a lot of team building and the smaller groups I establish feed into this one.

The Chairman of the Families Committee has been working with Rich Hall, founder of FamousKin.com, to do profiles on the twenty-two Germanna colonists with famous Germanna descendants, like Brad Pitt, Ellie Kemper, Janis Joplin and Helen Keller.  It’s a good website for us, because it captures the interest of people who are interested in history and genealogy.

Rich tells me that according to Google Analytics, FamousKin.com had just over 1.4 million visits to his website between 4/9/2020 and 4/8/2021, and of that total just over 1 million were “new” visitors. According to Facebook Insights, the demographics of his followers include 73% women and 26% men, and overall 84% over the age of 44.

A project of Bringham Young University, a searcher’s identifying code from FamilySearch can be automatically traced to famous people in the database.  We have added 30 key descendants of Germanna so far, so that people who have no idea about Germanna will be apprised of the Germanna Foundation and its archaeology program.

Geni is somewhat the inverse of Ancestry, which helps individuals build unique trees through records matches.  Geni, somewhat like FamilySearch, focuses volunteers to attempt build out one global tree, in which everyone fits.  A weakness in FamilySearch is that any settled scholarship can be undone by a well-meaning researcher, but Geni has stability in that Geni Master Profiles can be established for each descendant.  Cynthia Hicks Curtis and Barbara Price have been doing tremendous work in this area to lend accuracy to the tree down to living descendants.

The Germanna Foundation’s trustee Prof. Dr. Horst Schmidt-Böcking has put us in touch with Reinhard Daub from Trupbach, one of the Germanna ancestral villages in the Siegerland.  Horst says that he is “like Gerhard Moisel [the Siegen church archivist whom many Germanna Foundation travelers have met over the years] a very experienced ‘Ahnenforscher,’ a researcher in family genealogy.” Reinhard is joining our Germanna Foundation Families Committee, and will contact other researchers to find living relatives of the Germanna emigrants.   Reinhard provided us within three days reports on the descent [“Nachfahrenliste”] of the Fischbach, Holtzklau, Kemper, Otterbach, Richter, and Spielmann families – thousands of pages of material.  All of Reinhard Daub’s descent charts are shared in the Files section of the Descendants of the Germanna Settlers of Virginia group on Facebook.

Horst has told the Families Committee there are still several hundred with the surname Otterbach living in Trupbach, Seelbach and Siegen and environs.  Trustee Volker Schüettenhelm, president of the Deutsch-Amerikanische Gesellschaft (DAG) Siegerland-Wittgenstein e.V. will work to identify and recruit Germans to help make the Germanna Foundation Germany trip under the leadership of Barb Price even more of a success.  The Families Committee volunteers will work to find German cousins of the emigrants and invite them to visit us in America, and to meet us on the ground with the Germanna Foundation trip.

As mentioned above, the Families Committee now has volunteers to help us find living people with a Germanna tie in many time zones.  People who have agreed to volunteer live in the US, Germany, the United Kingdom, New Zealand, Netherlands, Switzerland, and a US Army contractor living in Kazakhstan.  We know there are descendants living in Canada, Australia, Mexico, Venezuela, and the Caribbean, but we have not yet prevailed upon them to sign up as registered volunteers, as over 200 others have done already.