You are here: Home / About / Fort Germanna Visitor Center / Library 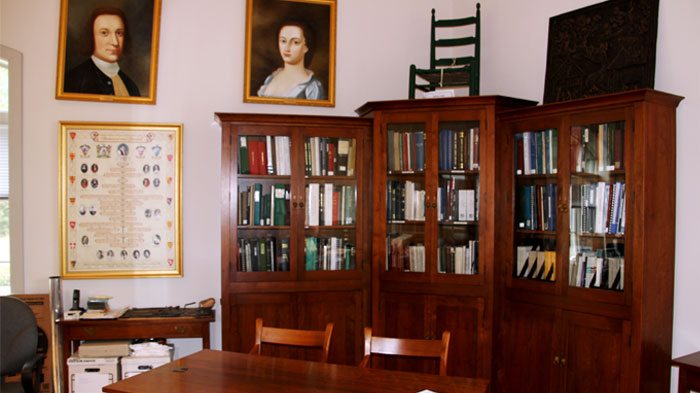 The library at the Visitor Center is the home of some hard-to-find texts and some interesting genealogical material.

Displays at the center include an antique bronze sculpture of a German Iron Assayist from Siegen, Germany.

This area has a centuries-old history of iron mining, smelting, and working.

This regional history was so strong that Alexander Spotswood saw the Germans as a labor force for the mining of silver ore deposits he hoped to develop in the Germanna area.

Though he was not involved in the decision of the Germans to emigrate to Virginia, he readily settled them at Fort Germanna which was built for their protection in an area beyond the extent of European civilization in colonial Virginia.

Four years after settling the Germans at Germanna he had them search for and develop iron mines.

The interior of the center boasts a beautiful spiral staircase.

Germanna is currently compiling data on the Revolutionary War contributions of Germanna descendants and many participated as part of the Culpeper Minutemen.

We are also compiling data on the Civil War contributions of the Germanna descendants. As this data is collected and organized, it will be available for researchers in the Germanna Library.

We invite your contributions to this effort.