You are here: Home / Germanna Blog / IN THE NEWS: UMW officially transfers land to Germanna Foundation 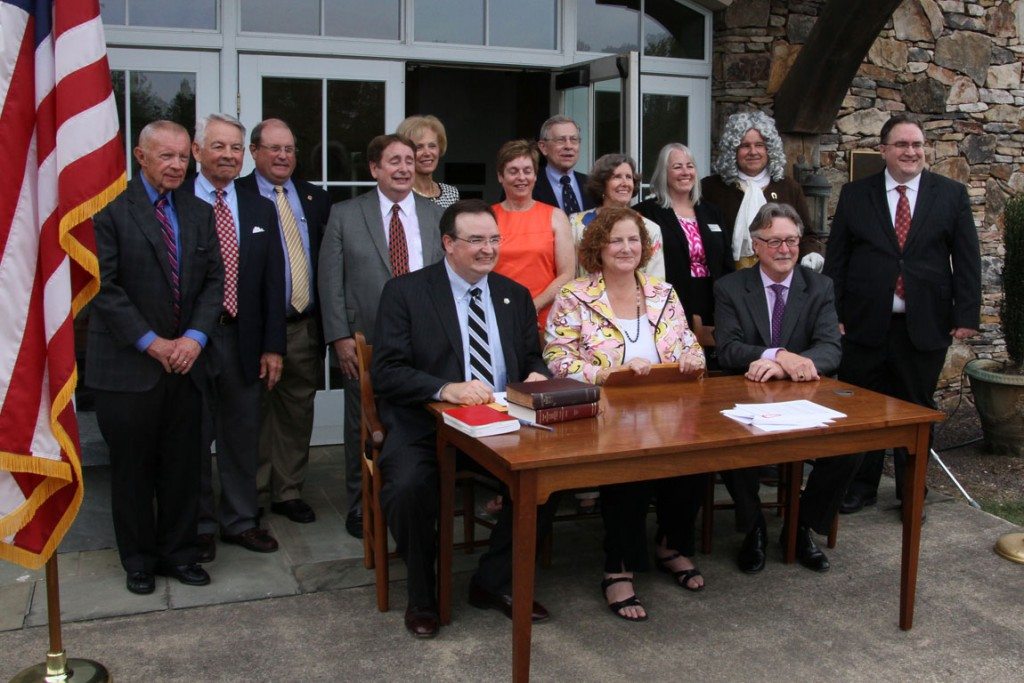 News article about the Germanna Foundation in the Culpeper Star-Exponent on Thursday, October 10, 2013 by Rhonda Simmons:

Wheat and UMW President Richard Hurley met at the Germanna Visitor Center on Route 3 in Orange County to finalize the agreement. Since 1990, UMW has held ownership of the property.

“This is an important American archaeological site and we are very pleased and excited about this and look forward to moving forward,” Wheat said in a previous comment to the Star-Exponent.

“This is a pretty exciting time. We are so grateful for the opportunity to learn and refine our plans and organization from the many people involved in the negotiations over the last three years.”

The Germanna Foundation will celebrate its 300th Jubilee of Germanna next year, marking the 1714 Germanna settlement.

“It is a moving experience in an American’s life to travel to a special place and say with pride and gratitude, ‘this is where our family became American,’” Wheat continued.

“On behalf of the Board of Trustees of The Memorial Foundation of the Germanna Colonies, Inc., chartered on March 14, 1956 in the Commonwealth of Virginia, it is my great honor to announce to you that the great object itself, Germanna, is coming home.”

World-renowned chief Jamestown archaeologist William Kelso conducted a survey more than 30 years ago at Germanna, discovering an intact ruin of probably “one of the most elaborate mansions ever built in colonial Virginia, the palatial Enchanted Castle.”

The 62-acre tract of Fort Germanna – created by British-appointed Gov. Alexander Spotswood in 1714 – included an “Enchanted Castle,” a town, ancient Native American sites, two prominent buildings thought to be a church and possibly a courthouse or jail, according to researchers.

In December 2007, Kelso returned and spoke to a crowd at Germanna Community College’s Daniel Technology Center, urging another dig at Germanna.

“I have always thought the Fort Germanna/Enchanted Castle site ranks among the most significant historical archaeological sites certainly in Virginia and arguably in the nation,” Kelso wrote via e-mail to former Germanna Community College English instructor Rob Sherwood in 2007.

“The establishment of both Jamestown and Germanna forts were historically pivotal.”

They uncovered additional remains of Fort Germanna. But by 1995, the research ended due to lack of funding.

“There will be great challenges ahead as we raise the necessary funds to hire the right Chief Operating Officer and conduct sensitive archaeological work on a complex site.

But these struggles are nothing compared to the struggles of the first colonists at Germanna,” Wheat said.

If funded, Wheat said the next archaeological dig would be “very careful, low impact and minimally invasive work.”