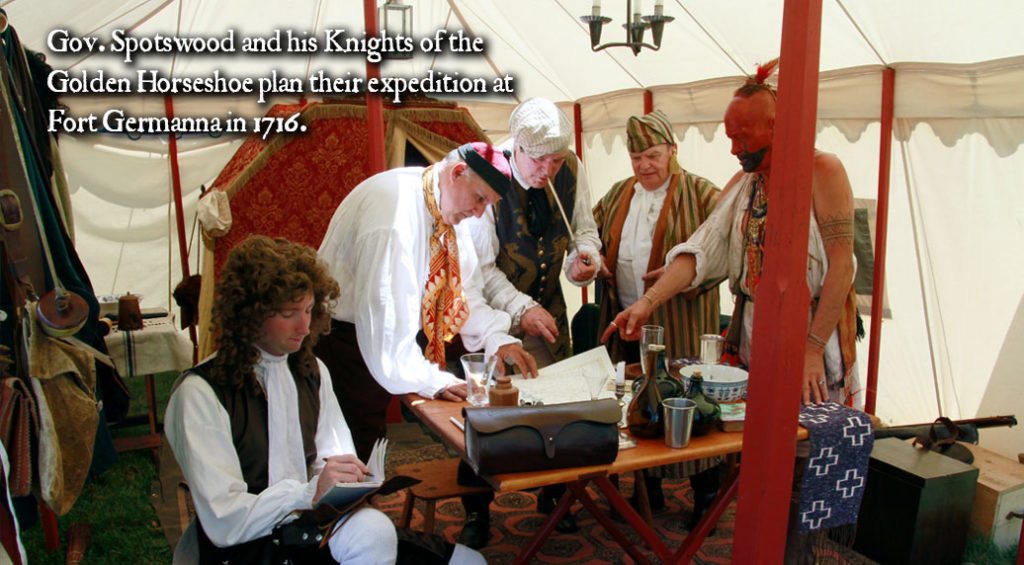 The Germanna Foundation Board of Trustees hosted a living history colonial encampment open to the public at no charge at their Brawdus Martin Visitor Center grounds on Saturday, September 17 and Sunday, September 18, 2016 from 10 am to 4 pm each day.

This event celebrated the 300th anniversary of the Knights of the Golden Horseshoe Expedition, which took place in August and September 1716 and began and ended at Fort Germanna.

Visitors saw an authentically-recreated encampment of the kind likely to have been established by Colonial Lt. Gov. Alexander Spotswood and his companions on their expedition over the Blue Ridge Mountains.

Several re-enactors portrayed some of the participants of that expedition including Gov. Spotswood himself, John Fontaine (from whose diary we owe much of our knowledge about the journey), George Mason III, Captain Jeremiah Clouder, and even a Meherrin Indian guide.

Several others joined them, including Hoffman’s Forge, a working blacksmith operation, and other “Knights” of the expedition, rangers, and some of the German colonists who all of a sudden were joined by this large and diverse group for several days before the journey began some 300 years ago.

This living history encampment helped visitors imagine what this experience must have been like for the Germanna colonists and their families, as well as the colonial gentlemen who met here on the frontier of the Virginia Colony.

They saw how Spotswood’s party “roughed it” during the expedition, and heard some of the details, and the tales, of the journey dutifully recorded by Fontaine, and which were later expounded upon and embellished in early American literature.

Visitors could take a short hike down the Germanna Foundation’s Red Trail to the “Rapid Anne” River and along the bank, largely untouched these past 300 years.

The sights, smells, sounds and environment, right where this all really happened, brought this legendary, yet largely overshadowed, chapter of Virginian and American history to life in to enjoy and remember.

See photos from a small preview re-enactment that took place during the July 2016 Germanna Foundation Conference and Reunion.

The Germanna Foundation is a 501(c)3 nonprofit organization dedicated to honoring the historic heritage of the Germanna colonists and their descendants, through programs of historic preservation and interpretation, genealogical research and publishing, archaeological exploration, and land conservation.  The Germanna Foundation has members in all 50 states, Canada, Australia, and Germany.

Spotswood and His Knights of the Golden Horseshoe Reach the Shenandoah River (Schiller Institute)
. . . Then, in June of 1716, Spotswood informed the Virginia Council that his rangers had found a pass over the Blue Ridge, where even supply trains could cross. The governor therefore recruited a “company of gentlemen,” to prove that the Blue Ridge could be easily crossed. Many of these recruits had sons and grandsons who played important roles in the development of the American Republic. Among them was George Mason, whose son worked with George Washington to draft the Fairfax Resolves, and who designed much of the constitution of the new state of Virginia. Then there was James Taylor, the ancestor of two Presidents—James Madison and Zachary Taylor. Robert Brooke’s grandson became governor of Virginia in 1798, and Thomas Todd’s family helped secure Kentucky for the Americans during the Revolution, and produced a future First Lady for Abraham Lincoln.

Governor Spotswood led his expedition out of the capital at Williamsburg on Aug. 20, and rode to his ironworks at Germanna, where the group was to join two companies of rangers. There, Spotswood had both the pack horses and riding horses shoed with iron for the journey over the mountains. Up until this time, Virginians had ridden their mounts unshod, because there was little domestic iron and the Tidewater Area had gentle, sandy terrain. The governor wanted to make the point that iron was not only necessary for crossing the mountains, but that it was essential for settlers who would tame the wilderness beyond. . . .

National Order of the Knights of the Golden Horseshoe; instituted 1716, reorganized April 15, 1916:

From the 1916 National Order of the Knights of the Golden Horseshoe:

Governor Spotswood, man of vision as well as action, dreamed of crossing the Appalachian Mountains and was the first to successfully achieve his purpose.

John Fontaine, who accompanied the expedition, wrote of the adventure; Hugh Jones, A. M., chaplain of the “Honorable Assembly” and minister at Jamestown, Va., retold the picturesque narrative in 1724; Howe the historian, Edward Ingle of Baltimore, and many others to whom the adventure made appeal, told the story, each in his own way. From these painters of past events is glimpsed a picture of Governor Spotswood and John Fontaine setting gayly out, on August 20, 1716, to attempt that which had hitherto been deemed impossible.

They were joined en route between Williamsburg and Germanna by several gentlemen, 14 rangers and 4 Meherrin Indians. They carried ample provisions and did not lack liquid refreshment, for their scribe enumerates “white and red wine, asquebaugh, brandy shrub, two kinds of rum, champagne, canary, cherry punch and cider.”

Before beginning the ascent, the well-mounted, well-armed company had their horses shod, horses being accustomed to traverse the low country, where there were few stones, without shoes, and then camping and eating and drinking by night and pressing sturdily on by day the party finally reached the mountain’s summit, where they cut his Majesty’s name upon the rock of the highest peak, naming it Mount George, in honor of their sovereign, King George I, and the next highest peak Mount Alexander, in honor of Governor Spotswood.

And then they rode homeward as cheerily as they had set out reaching Williamsburg on September 17, and having traveled many miles. To commemorate the event and encourage new enterprises and settlements westward, Governor Spotswood gave to each of the company a miniature golden horseshoe, set with garnets to represent nail heads. Upon each was the inscription “Sic juvat transcendere montes” (Thus it is delightful to cross the mountains).

Thus the members of the expedition were known as the “Knights of the Horseshoe” and any gentleman entitled to wear this golden horseshoe proved he had drunk his Majesty’s health upon the summit of Mount George.