You are here: Home / Germanna Blog / Germanna Record 18: The Second Germanna Colony and Other Pioneers 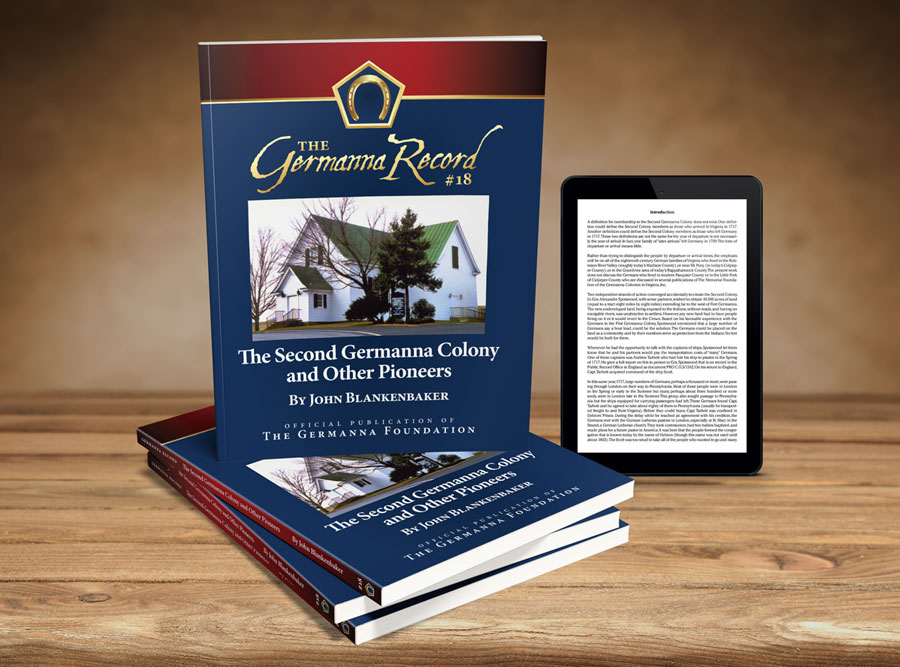 The first edition printing having been sold out, Germanna Record #18 is now available again on Amazon in print and Kindle format. The Second Germanna Colony and Other Pioneers is superb study and is the culmination of decades of research by John Blankenbaker, the foremost authority on the families that came to Germanna in 1717 and others that joined them later.

Every descendant of these families needs this book. It includes background on Governor Spotswood, the Germans’ sojourn in England, Hebron Church, land grants in Madison County, and much more. Every family surname has a section devoted to its background in Germany and early years in Virginia. Descriptive photographs from the Blankenbakers’ travels to the villages from which these families emigrated are a bonus.

Below is the Introduction and Table of Contents from the book.

Rather than trying to distinguish the people by departure or arrival times, the emphasis will be on all of the eighteenth century German families of Virginia who lived in the Robinson River Valley (roughly today’s Madison County), or near Mt. Pony (in today’s Culpeper County), or in the Gourdvine area of today’s Rappahannock County. The present work does not discuss the Germans who lived in modern Fauquier County or in the Little Fork of Culpeper County who are discussed in several publications of The Memorial Foundation of the Germanna Colonies in Virginia, Inc.

Two independent strands of action converged accidentally to create the Second Colony. Lt. Gov. Alexander Spotswood, with some partners, wished to obtain 40,000 acres of land (equal to a tract eight miles by eight miles) extending far to the west of Fort Germanna. The new, undeveloped land, being exposed to the Indians, without roads, and having no navigable rivers, was unattractive to settlers. However, any new land had to have people living on it or it would revert to the Crown. Based on his favorable experience with the Germans in the First Germanna Colony, Spotswood envisioned that a large number of Germans, say a boat load, could be the solution. The Germans could be placed on the land as a community and by their numbers serve as protection from the Indians. No fort would be built for them.

Whenever he had the opportunity to talk with the captains of ships, Spotswood let them know that he and his partners would pay the transportation costs of “many” Germans. One of these captains was Andrew Tarbett who had lost his ship to pirates in the Spring of 1717. He gave a full report on this in person to Gov. Spotswood that is on record in the Public Record Office in England as document PRO C.O.5/1342. On his return to England, Capt. Tarbett acquired command of the ship Scott.

In this same year, 1717, large numbers of Germans, perhaps a thousand or more, were passing through London on their way to Pennsylvania. Most of these people were in London in the Spring or early in the Summer but many, perhaps about three hundred or more souls, were in London late in the Summer. This group also sought passage to Pennsylvania but the ships equipped for carrying passengers had left. These Germans found Capt. Tarbett and he agreed to take about eighty of them to Pennsylvania (usually he transported freight to and from Virginia). Before they could leave, Capt. Tarbett was confined in Debtors’ Prison. During the delay while he reached an agreement with his creditors, the Germans met with the German Lutheran pastors in London, especially at St. Mary in the Strand, a German Lutheran church. They took communion, had two babies baptized, and made plans for a future pastor in America. It was here that the people formed the congregation that is known today by the name of Hebron (though this name was not used until about 1850). The Scott was too small to take all of the people who wanted to go and many were left behind. Instead of taking his passengers to Pennsylvania, Capt. Tarbett hijacked them to Virginia where he knew there were people who would pay the transportation of the Germans. Of those left behind, some, after a delay of a couple of years, did find their way to Virginia. Others probably returned to Germany or found homes in England.

This quick overview shows the difficulty of defining the members of the Second Colony. Should the definition be those who left Germany in 1717 or should it be those who arrived in Virginia in 1717? What about the family who left in 1709 but did not arrive in Virginia until 1720? In discussing the individual families, evidence of departure and arrival times will be given. For some families, there are no explicit times and this would further confound the classification of the Germans. Here “Second Germanna Colonist” will just mean, an early arrival in Virginia.

One problem in preparing a work of this nature is the question of how surnames should be presented. It was decided to use the most common English spelling if it is known. Some alternative English spellings are given and if possible some of the spellings in German. Some of the names have no English spelling as in the case of the men who had only daughters, e.g., Michael Käfer who had no sons, only daughters. In these cases, the German spelling, which is known, is used.

This work is divided into three parts. In Part I, there is a review of some eighteenth century documents providing a general history of the colony as a whole. Interspersed among these documents are plots of the early land patents and grants. A summary of improvements in the general and family histories is given. A list of references concludes Part I. In Part II, the individual families, listed alphabetically, are discussed, generally to the second generation if possible. Part III has photographs with short commentaries.

PART I
Introduction
General History
Col. Alexander Spotswood’s Explanations of His Land Acquisitions
The 40,000 Acre Tract, also called the Spotsylvania Tract
Origins in Germany and the Trip to America
The German Homes
St. Mary in the Strand (London) Lutheran Church Records (Andreas Mielke and Sandra Yelton)
The So-called Fifth Return Party
Captain Tarbett or Captain Scott?
Head Rights List of Alexander Spotswood
First Homes on the Spotsylvania Tract
The Colonial Government
Law Suits by Alexander Spotswood Against the Germans
The Creation of Spotsylvania County and Free Land1
Proofs of Importation of Selected Germans in Spotsylvania Court, 1724 to 1729
Patents in the Robinson River Valley of Virginia
Moving to the Robinson River Valley
The Second Colony Members’ Account
The Results of the Fund Raising Trip
Orange County Tithables in 1739
The Constitution of the German Evangelical Lutheran Congregation
Petition of the German Congregation of the County of Culpepper
Origins of the Planckenbühler (Blankenbühler) Family
The Utz-Volck Complex
The Clore-Weaver-Crigler-Yager Complex
Anna Barbara Schön, Anna Barbara Mayer, and Susanna Klaar
The First Colony Petition Taken to London by Zollicoffer
Improvements in the General History
Improvements in the Family Histories
References
General Secondary
Family Histories as Books
Hebron Lutheran Church
Original Culpeper County