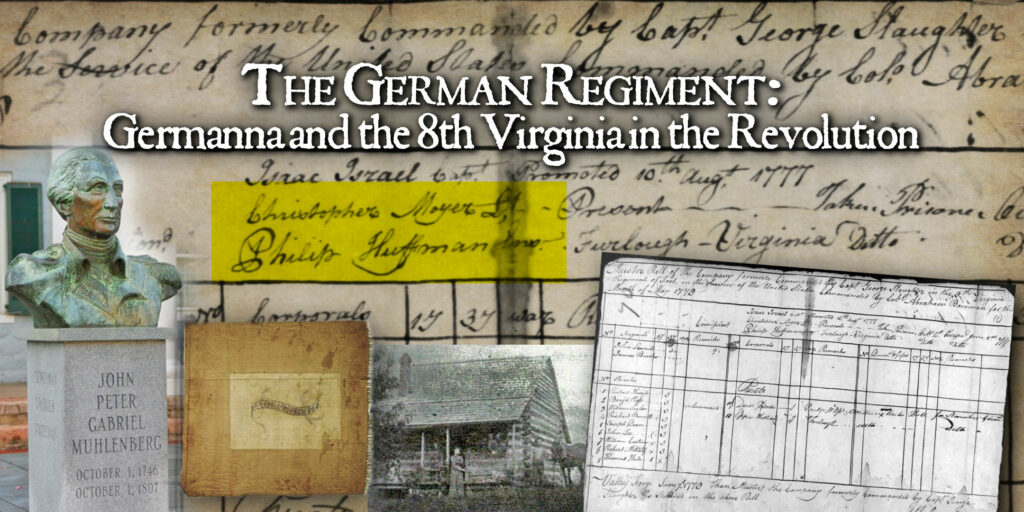 Updated — Video of the lecture:

The Culpeper Star-Exponent wrote an article about a lecture at the Germanna Foundation:

Area residents are in for a treat tonight (Sept 12, 2019) as a researcher presents fresh findings about Virginia’s “German Regiment,” a notable player in the Revolutionary War.

Gabe Neville of Fairfax County, who has been studying the 8th Virginia Regiment for more than 20 years, will share his work on George Slaughter, a captain of the regiment’s Culpeper County company and one of the founders of Louisville, Ky.

Born in Culpeper in 1739, Slaughter probably was a descendant of the Germanna Colony’s settlers.

He recruited one of the first companies for the famous Culpeper Minutemen.

Slaughter probably participated in the Battle of Great Bridge, Virginia, an early patriot victory over the British. He stayed with the regiment through the battles of Charleston and Brandywine, earning a promotion to major of the 12th Virginia just before the Battle of Germantown, Neville has written.

At Valley Forge in December 1777, Slaughter learned that a fire had destroyed his family’s Culpeper house and that they were threatened by a smallpox epidemic. That prompted him to ask Gen. George Washington for a furlough, which was denied.

Slaughter resigned his commission on Dec. 23 and headed home, later asking to be reinstated.

In 1780, Slaughter joined Clark on a military campaign against the Shawnee in Ohio. (Clark’s brother William and Meriwether Lewis, both Virginians, explored the Pacific Northwest from 1804 to 1806, journeying 8,000 miles into the unknown and back by boat, on foot and on horseback.)

When Clark departed for Virginia, he left Slaughter in command, and the Culpeper native oversaw construction of Fort Nelson at Louisville.

At age 25, Slaughter had volunteered to help suppress an Indian uprising known as Pontiac’s Rebellion. A decade later, he participated in Dunmore’s War, the royal governor of Virginia,’s campaign to “pacify” the Indians.

“An 8th Virginia soldier like Captain George Slaughter might have seen the Revolution as one chapter in a six-decade fight with the Indians for control of Kentucky and Ohio,” Neville has written.

“The territories were the scenes of nearly constant bloodshed from the defeat of General Edward Braddock in 1755 to the defeat of Shawnee chief Tecumseh in 1813. Slaughter and his comrades suffered from no moral anguish when it came to killing Indians.”

Nevillle will also mention other Culpeper soldiers with Germanna connections, following their stories into the Tennessee and Kentucky postwar frontiers.

A former journalist and congressional staffer, Neville is a senior advisor at Covington & Burling, an international law firm based in Washington, D.C. The Pennsylvania native writes a blog at 8thVirginia.com and updates a Facebook page, facebook.com/8thVirginia.

Neville has written articles for the Journal of the American Revolution, The Philadelphia Inquirer, and National Review.

The public is invited to his 7 p.m. talk in the Germanna Foundation’s new Hitt Archaeology Center, next to its five-sided, cupola-topped Fort Germanna Visitor Center on State Route 3 at the Orange-Culpeper line. The foundation’s headquarters is next to Germanna Community College’s Locust Grove Campus; the address is 2062 Germanna Highway, Locust Grove. Please register via Eventbrite.

After Neville’s presentation, he will entertain questions from the audience.