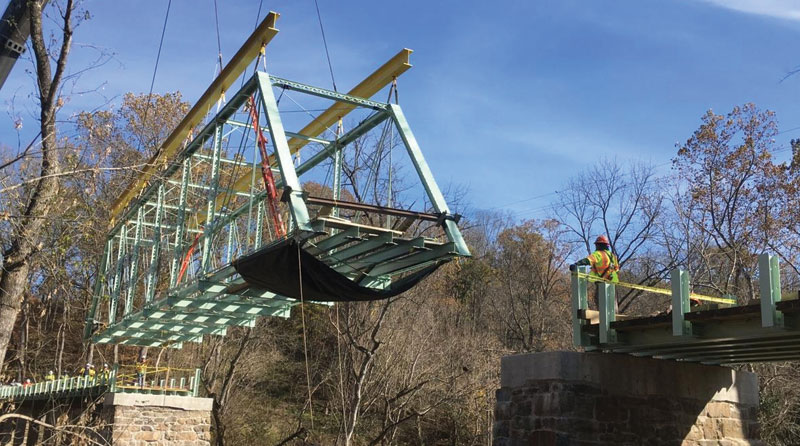 “History means a lot to me,” Russell Hitt said in 2018. “Route 613 is the old Lee Highway—my ancestors used that road, the Civil War armies used that road. I just think it’s very important to preserve things like that bridge.”

Article by CLINT SCHEMMER in the Culpeper Star–Exponent

After seven years of being shut to motorists, Culpeper County’s historic Waterloo Bridge reopened early this year, putting a historic Rappahannock River crossing back in action.

VDOT and its contractor hoisted the 100-foot iron truss from its stone abutments in April 2020, restored and repainted it, and lowered it back in place seven months later. The refurbished span—the oldest surviving metal truss bridge in Virginia—reopened to traffic Feb. 23.

That might not have happened save for one area family’s generosity. But Rappahannock County residents Russell and Joan Hitt, who cherished the landscapes where they were raised and fell in love, stepped forward. They pledged $1 million for the project, vaulting it from a possibility to a probability.

Russell Hitt, 85, died last September before he could see what his gift had brought forth.

But the tale is being told this spring in The Piedmont View, the newsletter of the Piedmont Environmental Council, a conservation nonprofit.

The circa-1879 bridge, which links Culpeper and Fauquier counties, carries State Route 613, a scenic byway that was an important trade route in the 1700s. Built by the Pittsburgh Bridge Co., the span is off U.S. 211, northeast of Amissville.

“Mr. Hitt was interested in the bridge because of his personal experience with its landscape,” PEC President Chris Miller said. “It demonstrates that the motivations for people to be interested in conversation can be quite varied.”

For Hitt and his wife, the Waterloo Bridge was a link to family history and to their memories of driving over the bridge in the early days of their relationship, Miller said.

Russell Hitt’s father grew up near the village of Waterloo along the Rappahannock, on land owned by his family since 1802. His great-great-grandfather, Albert Hilleary Hitt, traveled down the bridge road to take his grain to be ground at the mill at the river.

“It’s a long family tradition,” Hitt told the Fauquier County Board of Supervisors in 2016. “I miss going up and down the road and across the bridge and hearing the tires rumble on the boards. It was kinda nice. Don’t have many of those today.”

Previously renovated in 1919, the bridge was named in 2014 to Preservation Virginia’s roster of “Most Endangered Historical Sites.”

“History means a lot to me,” Hitt told the Fauquier Times in a 2018 video. “Route 613 is the old Lee Highway—my ancestors used that road, the Civil War armies used that road. I just think it’s very important to preserve things like that bridge.”

As chairman of HITT Contracting in Falls Church, Hitt had been the quiet benefactor of other undertakings in the region with a historical bent. He and his wife donated funds to help the Germanna historical foundation build its Hitt Archaeology Center on State Route 3 in eastern Orange County, to tell a fuller story of the peoples who settled the area in the early 18th century. The center opened in May 2019. One of Russell Hitt’s Germanna ancestors helped establish the German colonies of 1714 and 1717 on Virginia Gov. Alexander Spotswood‘s holdings along the Rapidan River.

In 2015, HITT Contracting provided labor, machinery and expertise in helping The Germanna Foundation repair circa-1757 Salubria, after the Mineral earthquake fractured its towering brick chimneys. They threatened to damage the Stevensburg mansion’s hipped roof, and had to be rebuilt by a master mason to resemble the Colonial-era ones. Another nationally known craftsman and his team gave the building a new, weather-tight, wooden-shingle roof.

The Waterloo Bridge saga began in 2013 when PEC representative Julie Bolthouse saw VDOT had listed the span to be replaced. She appreciated its history, knowing that Waterloo route had shuttled agricultural goods from the Shenandoah Valley to the Atlantic port of Fredericksburg, and linked Waterloo and Old Bridge roads in Culpeper County with Jeffersonton Road in Fauquier County.

Bolthouse determined to persuade officials to repair the bridge, and teamed up with Remington resident Mary Root, chair of the Fauquier County Architectural Review Board.

“Our task was monumental, given VDOT’s pattern of delaying repairs to the point of deterioration, followed by closure and replacement or demolition of similar historic bridges,” Bolthouse recounts in The Piedmont View.

PEC operatives met with VDOT and county officials, and raised money from Fauquier and Culpeper counties and private donors for a feasibility study that determined Waterloo Bridge was a candidate for rehabilitation, which would be less expensive than replacing it.

That “pushed VDOT to do its own study and finally admit that rehabilitation could be done for around $4 million—nearly $2 million less than the cost of replacement,” Bolthouse wrote.

VDOT listed the bridge for rehabilitation. But Bolthouse and Root knew that wasn’t a certain solution. Downstream on the Rappahannock, the historic truss Remington Bridge had sat on that same list for years because funds were short.

Then the Hitts heard of the bridge’s story from PEC, and everything changed. Their pledge of financial help was roughly one-fourth of the project’s estimated cost.

So this February, “years of hard work, persistence, impassioned community involvement and the generous contribution of two private citizens paid off when the Waterloo Bridge reopened to traffic for the first time in seven years,” Bolthouse wrote. “PEC was relentless in our efforts because the situation demanded it and area residents never gave up.”

She said she is thrilled that Mr. Hitt’s children and grandchildren, area residents, visitors and her own 7-year-old son “can again enjoy the historic bridge that Mr. Hitt loved so much, for years to come.”