You are here: Home / Archaeology / Digging for the truth at Fort Germanna 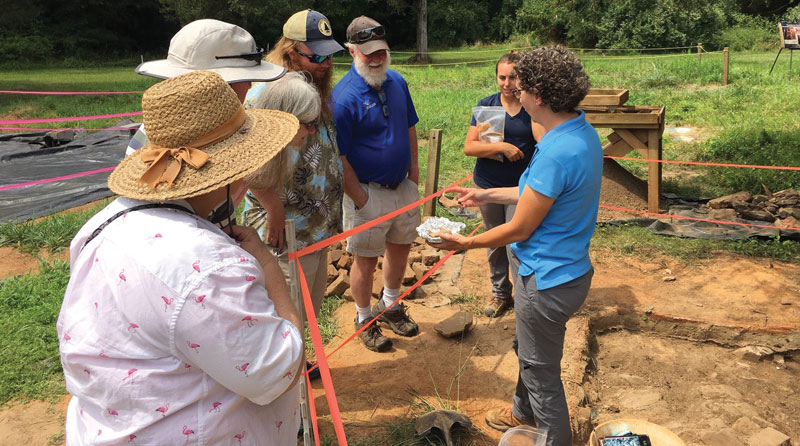 (Culpeper Star-Exponent) Many archaeologists were on hand Saturday at the Fort Germanna site in Orange County, where work is ongoing to discover new truths and answer questions about the settlement started there more than 300 years ago.

At a rare public access day, visitors mingled with historic preservationists and archaeologists, discussing the fort built at the behest of Virginia’s Lt. Gov. Alexander Spotswood by 42 German immigrants in the spring of 1714. Germanna was one of two forts designed to guard the English colony in the New World against Indian threats and slave uprisings.

Executive Director of the Germanna Foundation Timothy Sutphin was impressed with his staff’s efforts to make the public access day a success.

“These types of events are very important to Germanna and Virginia because most people don’t know about these incredible historic stories,” Sutphin said. “We bring alive history that was barely or never told, which is very important for those who are searching for facts about their ancestors.

“I am very excited about the path the Germanna Foundation is on when it comes to educating people on archeology,” he added.

Culpeper residents Dan McMahon and Jane Pease, who attended the public access day, were eager to learn more about the history of Fort Germanna.

“Learning about the history of Germanna is interesting,” McMahon said, noting artifacts that have been discovered already at the site.

“We have been a part of several Germanna programs and we are watching their progress,” Pease said. “The Germanna Foundation is discovering a lot of new things about Spotswood and the German immigrants which is very exciting.”

“A lot of people don’t know about this, and public access day allows the community to learn about unfamiliar local history,” Arford-Horne said. “I want the community to become more involved with the site and the excavations,” she added.

The objective of archaeology is to learn about human evolution from the past to the present using various research methods, Arford-Horne said.

“For this Fort Germanna site, I want to be able to tell the stories of the individuals who lived here. My goal is to focus on people who do not show up in historic documents, like Germans and people who were enslaved on the property,” she said.

The Germanna Foundation Director of Archaeology Eric Larsen brought more than 30 years of experience in archaeology to the public access day event.

“Fort Germanna is an important place with important stories that should be shared with the community,” Larsen said.

Stories of Virginia Indians, English settlement, German immigration, and forced migration of enslaved Africans were being discussed at the public access day event.

Larsen has a Ph.D. from the University of Buffalo and a career in archaeology that spans three decades. The Arlington resident has been working in Orange County with the Germanna Foundation since 2014.

“We are just scratching the surface here, realistically there are decades of work that could be done,” he said. “I hope that the program will continue over those years.”

Fort Christanna, located in Brunswick County, was intended to protect the southern edge of Virginia’s English settlement, while Fort Germanna on the Rapidan River guarded the northern settlements. Spotswood instigated the mining of silver and iron at the northern site.

Once the northern settlement was established Spotswood built a home at Fort Germanna that rivaled in size and amenities the governor’s palace in Williamsburg—known as the Enchanted Castle because it was described in those words by a 1700s visitor in a letter.

Since acquiring the property through a land transfer in 2013, the Germanna Foundation has has stabilized the Enchanted Castle remains, conducted new topographic survey and mapping work and collected data using ground-penetrating radar over the area most likely to have been the fort’s site.

The 62 acres of transferred land has a historic preservation easement covering it and includes the Enchanted Castle and original Fort Germanna. It is on property across from The Germanna Foundation’s visitors center.

Marianna Zecchini, David McCarthy and Megan Williams are all currently working as archaeologist interns at the Germanna Foundation.

“I think public access day is great, it’s more meaningful when we get to share historic information with the public,” Zecchini said. Her internship will end in November.

McCarthy was making pottery at the public access event using methods similar to Spotswood’s those of imported workers in the 1700s.

“Days like this are a lot of fun,” McCarthy said. “Hopefully, people continue to come out so we can do more events in the future.”

“My favorite part of the job is talking to the public and finding undiscovered artifacts,” said intern Megan Williams. “A lot of the artifacts being found are not about Spotswood but about the enslaved people who lived at Fort Germanna, and their stories should be told to a wider audience.”

By Jamar Billingsley, a student in the communication journalism master’s program at Regent University, is a summer intern with the Culpeper Star-Exponent.