You are here: Home / Events / Virtual Event: An Evening with Michael Twitty on African-Virginian Foodways – Feb. 17 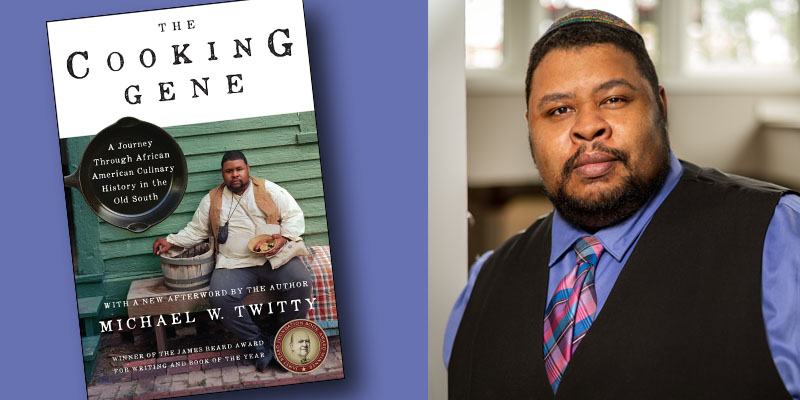 Join James Beard Award-winning culinary historian and historic interpreter Michael W. Twitty for a presentation on the West and Central African roots of early Virginia foodways and how one goes about collecting the evidence and connecting the dots across an interdisciplinary spectrum.

Michael W. Twitty is a living history interpreter, culinary historian, and food writer personally charged with teaching, documenting, and preserving the African American culinary traditions of the historic South and its connections with the wider African Atlantic world as well as parent traditions in Africa. He blogs at Afroculinaria.com.

He’s appeared on Bizarre Foods America with Andrew Zimmern, Many Rivers to Cross with Henry Louis Gates, and most recently Taste the Nation with Top Chef’s Padma Lakshmi. He also made a special guest appearance in Michelle Obama’s Waffles and Mochi show on Netflix.

In 2017, HarperCollins released Twitty’s The Cooking Gene, tracing his ancestry through food from West and Central Africa to America and from slavery to freedom. The Cooking Gene won the 2018 James Beard Award for best writing as well as the book of the year, making him one of the few black authors so awarded.

His piece on visiting Ghana in Bon Appetit was included in Best Food Writing in 2019 and was nominated for a 2019 James Beard Award. Twitty’s next book, Rice with UNC press was published this year and was named one of the best cookbooks of 2021 by the New York Times. Koshersoul, about his culinary journey as a Jew of African descent, will be out in 2022 through HarperCollins. He was most recently named a National Geographic Explorer in 2021.

This is a Donate-What-You-Can event. Your donation of any amount will go directly toward supporting this Germanna Foundation program and more programs like it as well as research, archaeology, and preservation of our historic sites. Thank you!

Upon completion of the below form, you will receive the link for this online Zoom webinar.

If you would like to sponsor the lecture, please make a donation with one of the below levels. We will recognize sponsors at the beginning and end of the program

If your browser cannot see the below form, click here.