You are here: Home / Germanna Blog / Germanna Foundation recognized for preservation of Salubria 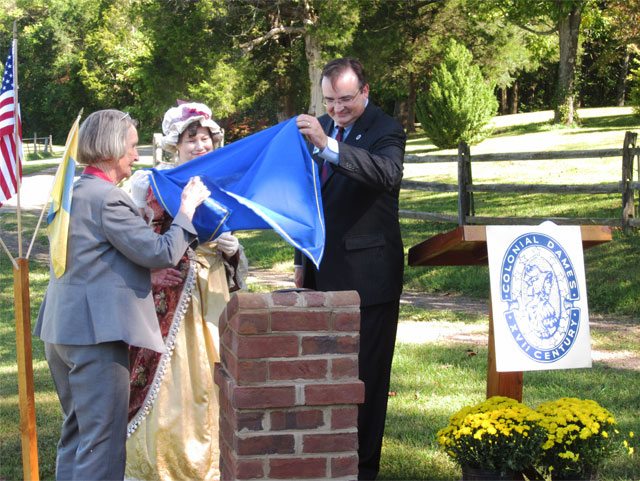 (Culpeper Star-Exponent) The Germanna Foundation’s ongoing efforts to preserve the historic mansion Salubria in Culpeper County was recognized Saturday morning with the dedication of a bronze plaque atop a brick historic marker by the House of Burgesses Chapter of the Colonial Dames XVII Century.

“(The) House of Burgesses Chapter honors the Germanna Foundation for the preservation of Salubria,” the bronze marker located near the property’s entrance states. “Built by the Rev. John Thompson of St. Mark’s Parish for his first wife, Butler Brayne Spotswood. Subsequent owners were (the) Barbour, Hansbrough and Grayson families.”

The house was build around 1757, after Thompson, the fourth rector of Little Fork Episcopal Church, married Spotswood, the widow of former Virginia Lt. Gov. Alexander Spotswood.

The property was donated to the Germanna Foundation in 2001 by owner Laura Grayson for its care and preservation.

Germanna Foundation President Marc Wheat, who was the featured speaker during Saturday’s dedication ceremony at Salubria, thanked the Colonial Dames for “the distinct honor you ladies have given the Germanna Foundation.”

In keeping with those goals, the organization welcomed members of the foundation and their guests to the Georgian mansion’s grounds Saturday morning for the marker dedication.

During his remarks, Wheat noted that the house has faced serious challenges over the past few years.

Several years ago the house suffered “a glancing blow” by a large tree on the grounds which was toppled by a mini-tornado, and then sustained serious damage during the earthquake in August of 2011, which Wheat said left both brick chimneys on the roof of the house severely damaged.

“There were 2,000 pounds of heavy brick ready to come crashing down through Salubria,” Wheat said.

The earthquake damage has since been repaired with the help of a half-million dollars in donations from foundation members and other supporters, Wheat said.

“The building is probably in the best condition it’s been in since the French and Indian War,” he said.

Wheat said on one of his many visits to Salubria years ago, his young son asked him why Salubria is being preserved.

“When you’re able to return to a place, it speaks to you in a way a book never could,” Wheat said.

Emily Tongue Richardson, the Colonial Dames’ Virginia state vice president, commended the local chapter on its work in recognizing historic Salubria and the work the Germanna Foundation has done preserving it.

“This is a great legacy you are leaving for future generation.”