You are here: Home / Genealogy / The Family of Anna Margreth Otterbach 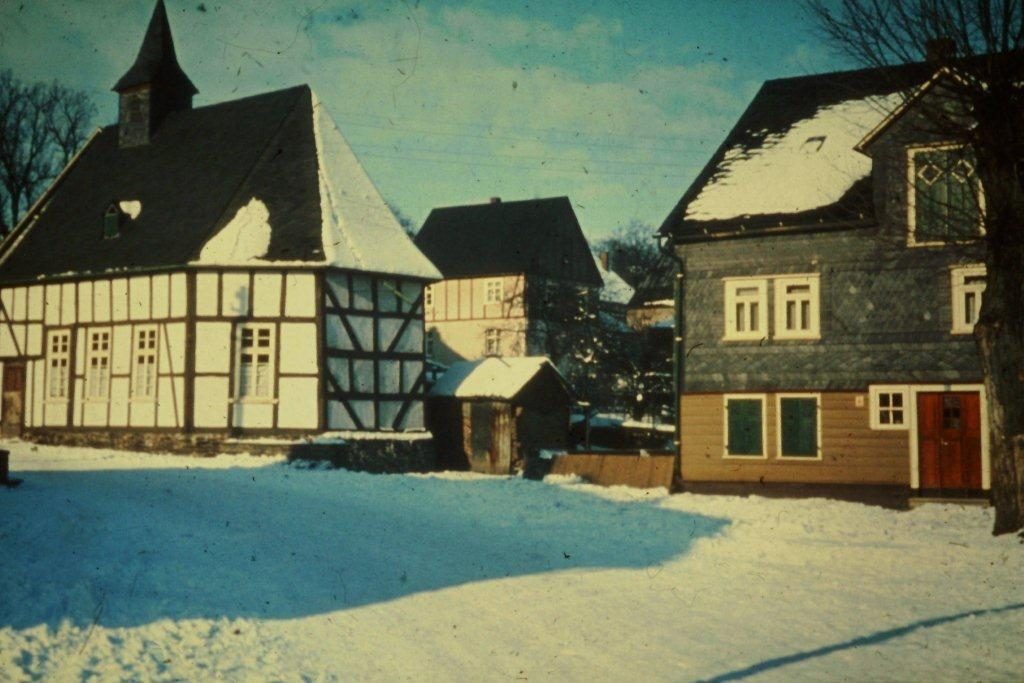 Anna Margreth Otterbach was one of five daughters of Hermann Otterbach and Elisabeth Heimbach. Her parents were married on 11 Aug 1685:

Hermann and Elisabeth (Heimbach) Otterbach lived in the village of Trupbach, in the house called, “Welmes,” that was built around 1680 and is still occupied today. Welmes is the house on the right, c. 1960.

Hermannus and Elisabeth (Heimbach) Otterbach had the following children whose baptisms were recorded in the Nikolaikirche (St. Nicholas Church) register in Siegen:

There are no records in either Germany or Virginia regarding the sons of Hermann and Elisabeth other than their baptisms. We do know that Hermann Otterbach was the first of the 1714 group to apply for permission to leave Germany, just a few weeks after Johann Justus Albrecht signed the contract with the ministers of Siegen.

On 5 Sep 1711, Otterbach stated that he wanted to emigrate to Prussia, a common request at the time according to the staff at the Stadt Archiv (City Archives) in Siegen, where this document was found:

In Virginia, we can only conjecture as to the fate of the daughters of Hermann and Elisabeth. We know that before they emigrated, the eldest daughter, Anna Margrethe, married the school master at Oberfischbach, Hans Jacob Holzklau, her lifelong friend and neighbor in Trupbach. But, we do not know when she died for certain, just that her death occurred between 1727 and 1729 when his second wife, Catherine, is named in a Virginia deed.

We can gather some information about Margret and the other four daughters from the importation statements made by their probable husbands at the Spotsylvania County Courthouse in 1724.

Anna Margreth Otterbach, born in 1686, the wife of Jacob Holtzclaw:

Ellsbeth Otterbach, born in 1689, is the probable second wife of Peter Heide/Hitt. His wife, Elizabeth is named in his statement, but there are no children named. This could be his first wife, Elisabeth Freudenberg, but it is thought that the first wife died before 1724:

Elisabeth Cathrina Otterbach, born in 1697, named Alice Katherine in the document, is the probable wife of John Kemper, who emigrated from Muesen near Siegen:

Maria Cathrina Otterbach, born in 1699, is the probable wife of John Joseph Martin, who also emigrated from the mining village of Muesen:

Anna Catharina Otterbach, born in 1705, is the probable wife of Harman Fischback, one of the sons of Philip and Elisabeth Fischbach, who emigrated in 1714 from the village of Trupbach:

Unfortunately, there is no certainty as to the deaths of the five Otterbach sisters, all wives of members of the First Colony. Wouldn’t it be great to know when and where they died and where they are buried? Just another reason to take note of your female line, they’re the other half of your genealogy!

Do you have a MISSing female in your line? If so, contact me at: Barbara.Price@germanna.org.

First published in the Summer 2015 edition of the Germanna Foundation Newsletter. Get our newsletters mailed to your home by becoming a member.