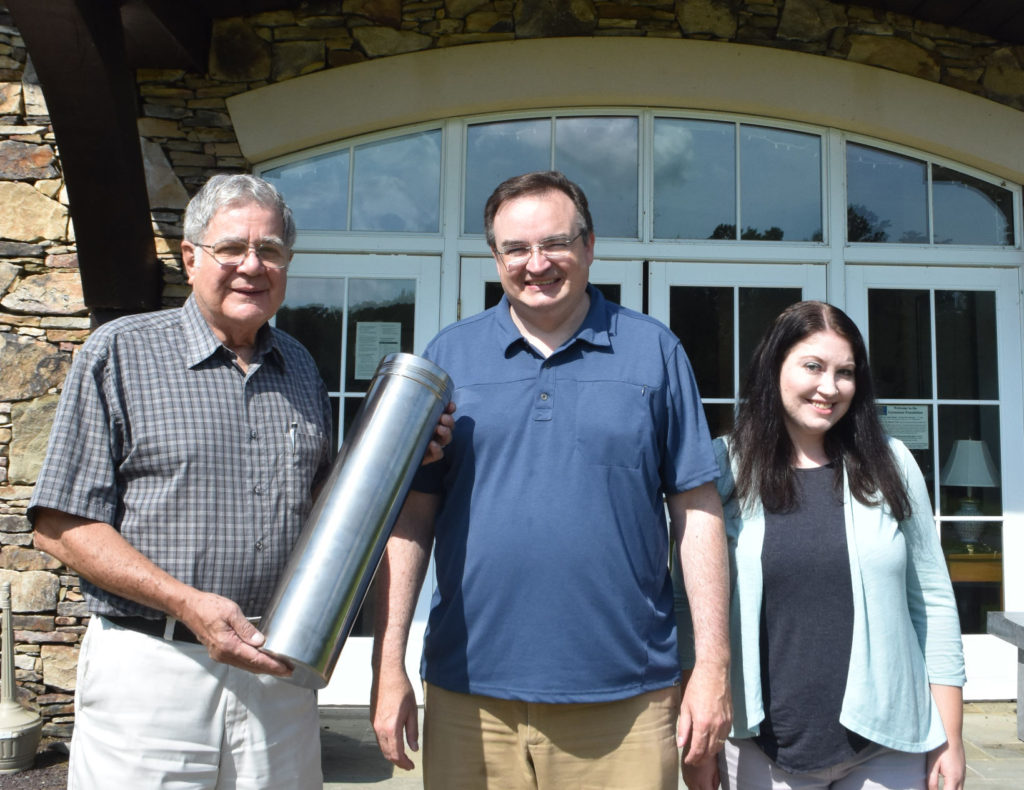 An article about Germanna’s time capsule appeared in the Orange County Review, written by Amber Galaviz:

If you could write yourself a letter and open it 50 years from now, what would you say? Or what would you like to tell your future descendants about your life and family?

Those interested in participating are invited to submit a letter-size document (front and back) with whatever text or photos they’d like to preserve for family, friends and even unborn descendants. The letter will be transferred to archival paper, placed in a sheet protector and put into the time capsule with other submissions and time capsule contents. The time capsule is a fundraiser for the foundation and participants are asked to contribute $50.

Raymond “Skip” Poole, a Germanna Foundation trustee, said the idea for the time capsule was developed by the board of trustees during a meeting in April. He has since taken the role as project coordinator, tracking submissions, contacting dignitaries the Germanna Foundation would like to receive submissions from and organizing other items to be included in the time capsule.

“How many people can say they’ve personally contributed to a time capsule?” he asked.

Poole, a Clore descendant from Germanna’s second colony, has already completed his submission. In his letter he included family genealogy, photos of his family and information about his life, accomplishments and connection to Germanna.

While he was researching his family, Poole said he hit a brick wall once he got to his great-grandfather, which motivated him to write a personal message for his future descendants. Poole’s daughter and three granddaughters have the middle name Clore. He said he hopes at least one of them will be present for the time capsule’s opening to learn more about their family heritage.

Marc Wheat, president of the Germanna Foundation, said his family has made the time capsule a family project. In addition to his submissions related to his role as president, Wheat said each member of his family is going to write a statement to include in a letter.

“[My children] have said ‘We will bring our kids [to the 2068 event],’ which is fun,” he added. “Like I said, having a time capsule where you’re confident where it’s going to be and who will open it up really helps people look forward and think about how they want their lives to turn out.”

“I thought about it today and I said I’m going to write a letter to myself saying, ‘Here’s where I hope you are. And if you’re not here, here’s what I want the people around to know,’” she said. “I’ll be 81 and I don’t know. I may have kids and grandkids by that point. ‘Dear future children…’.”

“It’s a sobering thing to put a letter in there to people you hope will be here in 50 years to receive it,” Wheat said. “You just don’t know what will happen to the Germanna Foundation, Orange County or the country in 50 years.”

While the “average Joe” may not think their life is interesting or worth the effort of writing down things about themselves, Wheat said the foundation wants people to know every life is important and should be remembered.

“I think what a lot of people wish is that people they knew had written things down about their lives. I probably know more about the colonists who came to Germanna than I know about my great-grandfather,” he said. “That’s always the challenge in every family. Every family thinks that they’re not interesting. Part of doing this time capsule is we’re telling everybody: every life is important and everyone should have something written about how they used their life.”

“That’s what I did in mine,” Poole added.

Poole developed a guideline for people interested in submitting a letter with ideas of what they could include in their personal submissions. He also invites people to contact him if they’d like to know more about what he wrote in his letter.

“We’re all given stewardship over things and the one thing that everyone is given the stewardship over is their own life. Even if Germanna is not part of the readers’ lives right now, it can be and we can show them what other people have done to preserve memories that maybe bestselling historians won’t write about, but there will be some people, people in the future, who find those things one of the most important things that they will have,” Wheat explained.

“‘Who Lives, Who Dies, Who Tells Your Story,’” Abruzzo said, quoting a song from the popular musical “Hamilton.” “You don’t want to die without your story being told, so write it for someone to talk about later. Anybody who thinks they would want to keep their story going we can encapsulate it.”

In addition to people’s personal submissions, the Germanna Foundation will include an “open me first” package within the time capsule, which will congratulate the opening committee on the historical event, as well as explain the other contents of the time capsule.

Meanwhile, the foundation has reached out to local governments and organizations with vested interests in Germanna for submissions, such as Germanna Community College, local historical societies and the Orange County Chamber of Commerce. The Orange County Board of Supervisors adopted and submitted a resolution to include in the time capsule outlining the county’s 50-year vision for the eastern end of the county. The mayor of Bonnigheim, Germany submitted a letter, as well as the Hebron Lutheran Church Foundation.

“Everything we’re doing is personal, related to Germanna and the descendants, and organizations like the Orange County Review and the Orange County Board of Supervisors which have interactions with us; they’re all involved,” Poole said.

The Germanna Foundation’s mission to preserve the heritage of the earliest organized settlements of Germans in colonial Virginia in 1714 and 1717, has not changed since the foundation was chartered in 1956. However, a lot has evolved for the foundation which now operates a visitor center at its property at 2062 Germanna Highway, which encompasses 179 acres of the original land settled by German families under the direction of Lt. Gov. Alexander Spotswood. A 2013 land transfer from the University of Mary Washington provided the foundation 62 acres which includes the Enchanted Castle and original Fort Germanna and is on property on Route 3 (Germanna Highway) across from the visitor center. In addition, the Germanna Foundation donated 100 acres to Virginia in 1969 to launch Germanna Community College.

In another 50 years, Wheat said he doesn’t see the Germanna Foundation’s mission changing, but rather propelling forward.

“There are all kinds of frontiers that Americans have crossed and we want to tell the Germanna story as part of that growth and forward movement of the American people,” he said. “In 50 years, we want this to be in textbooks, or the equivalent of textbooks, as part of the American narrative of the western movement of the frontier and how Germanna was really sort of American in embryo because all these other frontier settlements were all English.”

Wheat said he envisions Germanna being the third leg on the American history stool that includes Jamestown and Williamsburg. Meanwhile, the Germanna Foundation will continue work on its descendants’ database and at the archaeology site to find Fort Germanna and the Enchanted Castle.

“The thing about a time capsule is it may benefit the people who are putting it together more than the people who are reading what’s inside it,” he added. “I say that because it makes those of us who care about Germanna think more about what we want this to be in 50 years and how to get there.”

Fifty years ago in America, both Robert F. Kennedy and Martin Luther King Jr. were assassinated, U.S. athletes raised their fist during the Summer Olympics in protest of racial discrimination in America, Star Trek aired the first interracial kiss on American television, The Beatles’ “Hey Jude” topped the charts and Apollo 8 was the first manned spacecraft to orbit the moon.

A year later, Germanna descendant Buzz Aldrin walked on the moon. It was President John F. Kennedy who set the goal to be on the moon within the decade, Wheat noted. He hopes this time capsule will do the same thing with some of the Germanna Foundation’s plans.

“I think it’s almost surprising that we’re almost to the 50th anniversary of the moon landing and we haven’t had anyone up there since 1972,” Wheat said, noting his interest in space exploration and desire to have Germanna descendants on Mars someday. “What you think of the trajectory of the future may be disappointing in some ways because we’re not at Mars yet, but in other ways, it’s unimaginable. Who could’ve imagined the internet 50 years ago? And the fact that you can simply ask a question, almost like Star Trek, and your phone will give you somebody’s phone number or it will take you to a Wikipedia article.”

“People thought we’d be on hoverboards by now,” Abruzzo added.

The time capsule also will be a fundraiser for the Germanna Foundation to realize future goals by establishing an endowment fund. In 50 years, when the capsule is open, the foundation can use the monies to promote its mission, Wheat said.

Submissions for the time capsule must be received before Oct. 1. Those with questions or who are interested in submitting a letter for the time capsule can contact Skip Poole at poole123189@comcast.net or (703) 505-7593. For more information on the Germanna Foundation, visit germanna.org.

More Information about the Time Capsule